Postcolonialism and the Law 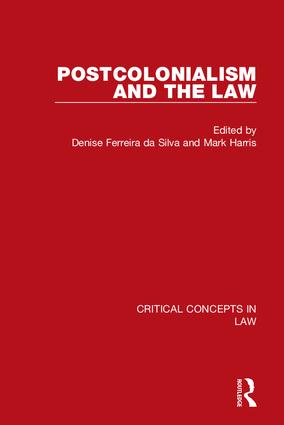 Postcolonialism and the Law provides a long overdue delineation of the field of enquiry that engages with the legal programmes, structures, and procedures which have sustained Euro-North American supremacy on the international political stage for the past fifty years or so. Focusing on the relationship between law and the racial and colonial mechanisms of subjugation at work in the global present, the contributions assembled in this new four-volume collection from Routledge’s Critical Concepts in Law series attend to juridical apparatuses as they operate in concert with economic and ethical frameworks, procedures, and architectures. Instead of approaching law as a self-sufficient instrument of power, the gathered major works expose the complex deployment and operation of legal instruments and how they—along with economic mechanisms and ethical programmes—participate in the constitution of the political space shared by both former colonial powers and colonies.

With a full index, together with a comprehensive introduction, newly written by the editors, which places the collected material in its historical and intellectual context, Postcolonialism and the Law is an essential work of reference. The collection will be particularly useful as a database allowing scattered and often fugitive material to be easily located. It will also be welcomed as a crucial tool permitting rapid access to less familiar—and sometimes overlooked—texts. For postcolonial theorists and lawyers, as well as those working in cognate disciplines, such as Critical Legal Studies, Ethics, Cultural Studies, Race and Ethnicity Studies, and Human Rights, it is certain to be valued as a vital one-stop research and pedagogic resource.