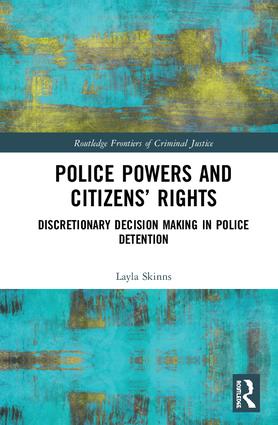 Police detention is the place where suspects are taken whilst their case is investigated and a case disposal decision is reached. It is also a largely hidden, but vital part of police work and an under-explored aspect of police studies. This book provides a much-needed comparative perspective on police detention. It examines variations in the relationship between police powers and citizens’ rights inside police detention in cities in four jurisdictions (in Australia, England, Ireland and the US), exploring in particular the relative influence of discretion, the law and other rule structures on police practices, as well as seeking to explain why these variations arise and what they reveal about state-citizen relations in neoliberal democracies.

This book draws on data collected in a multi-method study in 5 cities in Australia, England, Ireland and the US. This entailed 480 hours of observation, as well as 71 semi-structured interviews with police officers and detainees. Aside from filling in the gaps in the existing research, this book makes a significant contribution to debates about the links between police practices and neoliberalism. In particular, it examines the police, not just the prison, as a site of neoliberal governance.

By combining the empirical with the theoretical, the main themes of the book are likely to be of utmost importance to contemporary discussions about police work in increasingly unequal societies. As a result, it will also have a wide appeal to scholars and students, particularly in criminology, criminal justice.

Contents:
1. Introduction
2. Theorising Police Powers and Citizens’ Rights
3. The Police in Context: Neoliberalism in the Selected Countries
4. The Police in Context: Patterns of Policing in the Selected Countries
5. Inside Police Detention: Conditions, Routines, Rituals and Rules
6. Abiding by the Rules? Legality in Police Custody
7. Styles of Authority
8. Meeting Individual Needs: Vulnerable Detainees in Police Custody
9. Conclusion