Law and the Question of the Animal: A Critical Jurisprudence 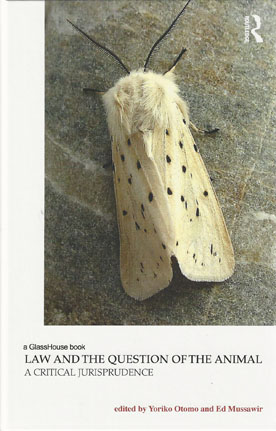 Law and the Question of the Animal: A Critical Jurisprudence addresses the problem of 'animal life' in terms that go beyond the usual extension of liberal rights to animals.

The discourse of animal rights is one that increasingly occupies the political, ethical and intellectual terrain of modern society. But, although the question of the status of animals holds an important place within a range of civil, political and technological disciplines, the issue of rights in relation to animals usually rehearses the familiar perspectives of legal, moral and humanist philosophy. '

Animal law' is fast becoming a topic of significant contemporary interest and discussion. This burgeoning interest has not, however, been matched by renewed inquiry into the jurisprudential frames and methods for the treatment of animals in law, nor the philosophical issue of the 'human' and the 'animal' that lies at law's foundation.

Responding to this interest, Law and the Question of the Animal: A Critical Jurisprudence brings together leading and emerging critical legal theorists to address the question of animality in relation to law's foundations, practices and traditions of thought. In so doing, it engages a surprisingly underdeveloped aspect of the moral philosophies of animal rights, namely their juridical register and existence. How does 'animal law' alter our juridical image of personality or personhood? How do the technologies of law intersect with the technologies that invent, create and manage animal life? And how might the ethical, ontological and ceremonial relation between humans and animals be linked to a common source or experience of law?

Contents:
1. Introduction, Yoriko Otomo and Ed Mussawir (editors)
2. The Animal Protagonist: Representing 'The Animal' in Law and Cinema - Connal Parsley
3. Witness Demeanour as Real Evidence: Mechanistic Philosophy of Bodies Without Minds - Piyel Haldar
4. Inventing Animals - Cressida Limon
5. Chimpanzees in Court: What Difference Does it Make - Cimea Bevilacqua
6. The Jurisprudential Meaning of the Animal: A Critique of the Subject of Rights in the Laws of Scienter and Negligence - Ed Mussawir
7. Dressing the Sow and The Legal Subjectivation of the Non-Human Animal - Victoria Ridler
8. Whipping to Win: Measured Violence, Delegated Sovereignty and the Privatised Domination of Non Human Life - Dinesh Wadiwel
9. Law in the Marketplace - Marc Trabsky
10. The Normativity of an Animal Atmosphere - Andreas Philippopoulos-Mihalopoulos
11. Species, Scarcity and the Secular State - Yoriko Otomo