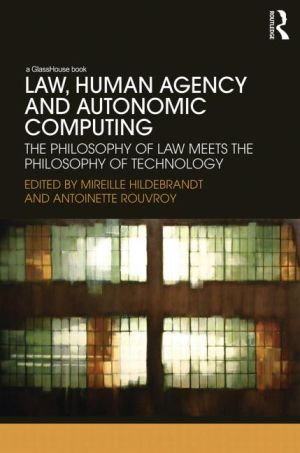 Autonomic Computing and Transformation of Human Agency interrogates the legal implications of the notion and experience of human agency implied by the emerging paradigm of autonomic computing, and the socio-technocal infrastructures it supports. The development of autonomic computing and ambient intelligence - self-governing systems - challenge traditional philosophical conceptions of human self-constitution and agency, with significant consequences for the theory and practice of constitutional self-government. Ideas of identity, subjectivity, agency, personhood, intentionality, and embodiment are all central to the functioning of modern legal systems. But once artificial entities become more autonomic, and less dependent on deliberate human intervention, criteria like agency, intentionality and self-determination, become too fragile to serve as defining criteria for human subjectivity, personality or identity, and for characterizing the processes through which individual citizens become moral and legal subjects. Are autonomic – yet artificial – systems shrinking the distance between (acting) subjects and (acted upon) objects? How ‘distinctively human’ will agency be in a world of autonomic computing? Or, alternatively, does autonomic computing merely disclose that we were never, in this sense, ‘human’ anyway? A dialogue between philosophers of technology and philosophers of law, this book addresses these questions, as it takes up the unprecedented opportunity that autonomic computing and ambient intelligence offer for a reassessment of the most basic concepts of law.