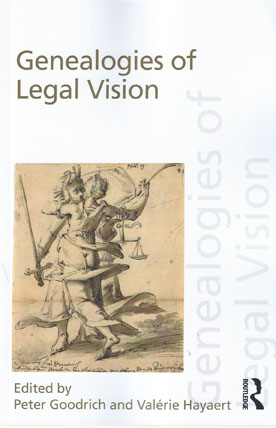 This collection focuses on the history of legal emblems and the genealogy of law’s visual structures. The growing interest in law and the visual has tended to focus in a somewhat lazy fashion upon film and law, rather than addressing the actual history of law’s regimes of visual control.

But early modern lawyers, civilian and common alike, developed their very own ars iuris or art of law. A variety of legal disciplines always relied in part upon the use of visual representations, upon images and statuary to convey authority and sovereign norm.

Military, religious, administrative and legal images found juridical codification and expression in collections of signs of office, in heraldic codes, in genealogical devices, and then finally in the juridical invention in the mid-sixteenth century of the legal emblem book.

This book traces the complex lineage of the legal emblem and argues that the mens emblematica of the humanist lawyers was the inauguration of a visiocratic regime that continues in significant part into the present and multiple technologies of vision.

Bringing together leading experts on the history of legal emblems to address the critical question of why it was lawyers who authored the emblemata, and correlatively, what was the relation and role of these visual depictions of norms to the practice and performance of law, this collection provides a ground-breaking account of the long relationship between visibility, meaning and normativity.

Contents:
1.
Valerie Hayaert, Legal Emblems inserted in the Corpus Juris Civilis
2.
Peter Goodrich, The Evidence of Things not Seen
3.
Paul Raffield, Metamorphosis, Mythography, and the Nature of English Law
4.
Anselm Haverkamp, On Emblems: Iconic Difference
5.
Bradin Cormack, The Emblem of Emblems: A Theory of the Frontispiece
6.
Agnes Guideroni, The heart and the law in the balance
7.
Christian Biet, The Interpretation of Emblems
8.
Piyel Haldar, Tongue and Eye
9.
Alick M McLean, Don't Screw with the Law: Visual and Spatial Defenses against Judicial and Political Corruption in Communal Italy
10.
Bill Eggington, Crime Shows: CSI in Habsburg Spain
11.
Judith Resnik and Dennis Curtis, Why Eyes? Puzzling about the Relationships of Sight, Knowledge, Judgment and Justice
12.
Katrin Becker, Lawyers as mediators of humanity – reflections on legal emblems and the tripartition of human existence