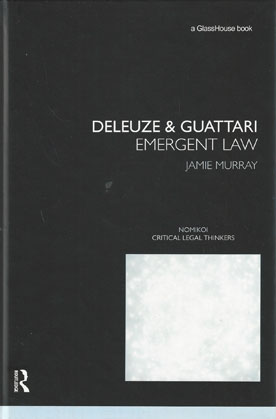 Situating Deleuze & Guattari's engagement with social organisation and legality in the context of their theory of 'abstract machines' and 'intensive assemblages', Jamie Murray presents their theory of law as that of a two-fold conception of, first, a transcendent molar law and, second, an immanent molecular emergent law. Transcendent molar legality is the traditional object of legal theory. And, as explicated here, immanent molecular emergent law is the novel juridical object that Deleuze & Guattari identify.

Developing this conception, Deleuze & Guattari: Emergent Law draws out its implications for current and for future legal theory; arguing that it provides the basis for a new jurisprudence capable of creating new concepts of legality.