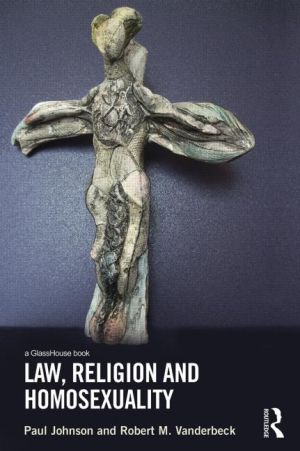 Law, Religion and Homosexuality is the first book-length study of how religion has shaped, and continues to shape, legislation that regulates the lives of gay men and lesbians in the United Kingdom.

Through a systematic examination of how religious discourse influences the making of law - in the form of official interventions made by faith communities and organizations, as well as by expressions of faith by individual legislators - the authors argue that religion continues to be central to both enabling and restricting the development of sexual orientation equality.

Whilst some claim that faith has been marginalized in the legislative processes of contemporary western societies, Johnson and Vanderbeck show the significant impact of religion in a number of substantive legal areas relating to sexual orientation including: same-sex sexual relations, family life, civil partnership and same-sex marriage, equality in employment and the provision of goods and services, hate speech regulation, and education.

Law, Religion and Homosexuality demonstrates the dynamic interplay between law and religion in respect of homosexuality and will be of considerable interest to a wide audience of academics, policy makers and stakeholders.

Contents:
Introduction
1. Religion and the legal regulation of homosexual sex
2. The boundaries of the family: religion and same-sex parenting
3. Religious exemptions from sexual orientation equality
4. The secular and the sacred: civil partnership and same-sex marriage
5. Homophobic hate speech and freedom of religious expression
6. Religion, homosexuality and state education Conclusion