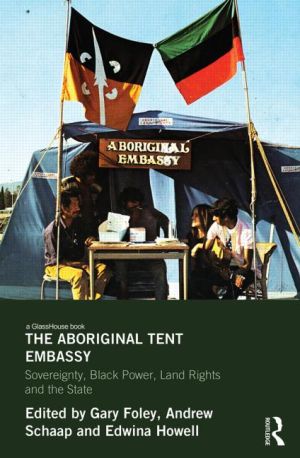 The 1972 Aboriginal Embassy was one of the most significant indigenous political demonstrations of the twentieth century. What began as a simple response to a Prime Ministerial statement on Australia Day 1972, evolved into a six-month political stand-off between radical Aboriginal activists and a conservative Australian government. The dramatic scenes in July 1972 when police forcibly removed the Embassy from the lawns of the Australian Houses of Parliament were transmitted around the world. The demonstration increased international awareness of the struggle for justice by Aboriginal people, brought an end to the national government policy of assimilation and put Aboriginal issues firmly onto the national political agenda. The Embassy remains today and on Australia Day 2012 was again the focal point for national and international attention, demonstrating the intensity that the Embassy can still provoke after forty years of just sitting there. If, as some suggest, the Embassy can only ever be removed by Aboriginal people achieving their goals of Land Rights, Self-Determination and economic independence then it is likely to remain for some time yet. 'This book explores the context of this moment that captured the world's attention by using, predominantly, the voices of the people who were there. More than a simple oral history, some of the key players represented here bring with them the imprimatur of the education they were to gain in the era after the Tent Embassy. This is an act of radicalisation. The Aboriginal participants in subversive political action have now broken through the barriers of access to academia and write as both eye-witnesses and also as trained historians, lawyers, film-makers. It is another act of subversion, a continuing taunt to the entrenched institutions of the dominant culture, part of a continuum of political thought and action.' (Larissa Behrendt, Professor of Law, Jumbunna Indigenous House of Learning, University of Technology Sydney)

Contents:
Preface Larissa Behrendt
Introduction
Gary Foley, Andrew Schaap & Edwina Howell
SECTION 1: THE ORIGINS OF THE EMBASSY 1. The Aboriginal Embassy: An account of the protest of 1972 Scott Robinson
2. A Reflection on the first thirty days of the Embassy Gary Foley
3. The Origins of Aboriginal political consciousness and the Aboriginal Embassy, 1907-1972 Gordon Briscoe
4. Aboriginal Protest Leith Duncan
5. Black Power - by any means necessary Edwina Howell
6. Tracking Back: Parallels between the 1920s Aboriginal Political Movements Parallels and 1972 Tent Embassy John Maynard
7. The Freedom Ride Ann Curthoys
SECTION 2 THE EVENT OF THE EMBASSY 8. The Beginnings of the Embassy (January 1972)
9. Camping Indefinitely at the Embassy (February-June 1972)
10. Confrontation at the Embassy (July 1972)
11. The Continuing Presence of the Embassy since 1992
SECTION 3 THE LEGACY OF THE EMBASSY 12. Anniversary Reflections
13. The Constitutional Politics of the Aboriginal Embassy Paul Muldoon & Andrew Schaap
14. Stating Genocide in Law Jennifer Balint
15. The spatial politics of Aboriginal protest in the Parliamentary Triangle Kurt Iveson
16. War by Other Means: The Australian War Memorial and the Aboriginal Tent Embassy in National Space and Time Fiona Nicoll
17. What do we want? Not native title, that's for bloody sure Nicole Watson