This book is now Out of Print.
A new edition has been published, the details can be seen here:
A Second Miscellany-at-Law: A Further Diversion for Lawyers and Others isbn 9781898029779

A Second Miscellany-at-Law: A Further Diversion for Lawyers and Others 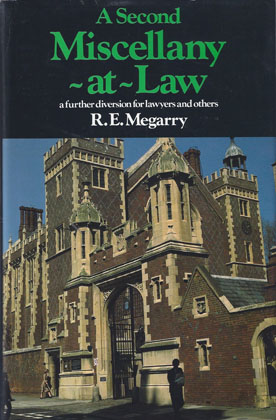 ....from the Preface
Miscellany-at-Law was first published in 1955. It sought to include not only wise and witty sayings of the judges but also curiosities of lawyers and the law

....The Preface of Miscellany-at-Law included a frank confession of my ignorance of much that ought to have been included, particularly from overseas jurisdictions: and I uttered a gentle prayer that those who know better would lighten my darkness, The bounteous response was surprising as it was pleasant. With this rich harvest coupled with material for which I had found no convenient home in the book and the fruits of further researches and accidental discoveries of my own, there was enough matter ....for this further volume.

A new jacket wrapped around the original 1973 edition - Probaly issued towards the the end of the 1970's, but no one knows exactly when any longer.