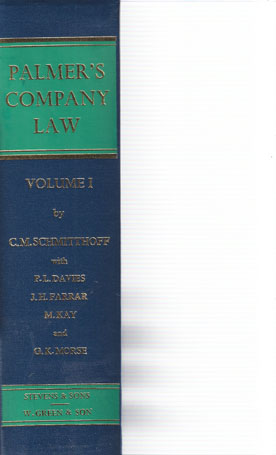 Sir Francis Palmer indicated the object of this work in a passage which appeared in the Preface to all nine Editions prepared by the author himself and which, it is suggested, should always introduce this work. These are his words:-

The Editors of this-the twenty-third-Edition have attempted to bring up to date Sir Francis Palmer's work in the spirit expressed in that passage, although the fundamental changes which have taken place in company law and practice since the work was first published have made it necessary to present it in an entirely new form.

These changes are, indeed, fundamental. In the more than 84 years which have passed since Sir Francis gave the famous lectures on which the work was originally founded, company law has become the law of business organisation and management in Great Britain.

In the wider context of business law, company law has become a discipline of its own, with its own characteristics and its own atmosphere. The mechanics of that discipline appear to be complex and technical but the intricate legal pattern at once assumes life and significance if considered against its extra-legal background.

Today Sir Francis Palmer's aim to make this work practically useful to the lawyer and businessman can only be achieved if these tendencies are duly taken into account when the legal framework of companies is considered.