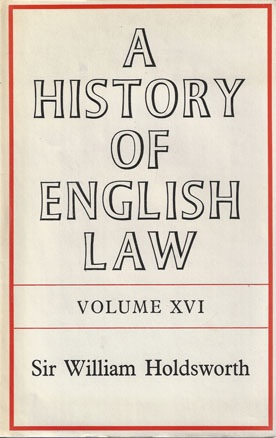 The dust jacket image shown is of the 1966 reprint. The current edition has no dustjacket.

Sir William Searle Holdsworth was professor of constitutional law at University College, London (1903–8). After 1922 he was Vinerian professor of English law at Oxford. Holdsworth's greatest achievement is his History of English Law in 17 Volumes.

Sir William Holdsworth's monumental legal history extends from Anglo-Saxon times to the 19th-century Judicature Acts. It was interrupted by his death in 1945, when he had reached Volume 12.

Subsequent volumes have been edited by Professor A. L. Goodhart and H. G. Hanbury, at first from Holdsworth's typescript and later, with more difficulty, from his manuscript notes.

Volumes 15 and 16 together complete Chapter V of Book V, which covers the period from the Reform Act of 1832 to the Judicature Acts 1873-1875. Volume 16 attempts, by way of biographies of the main legal personalities, to establish the social, political, and economic background of the time.

Holdsworth examines the careers of Lyndhurst, Cottenham, Truro, St. Leonards, Cranworth, Chelmsford, Campbell, Westbury, Hatherley, Selborne and Cairns and then goes on to give an account of the Masters of the Rolls, beginning with Langdale and ending with Jessel, and of the Lords Justice in Chancery, from Knight Bruce to Giffard.

He continues with an account of the civilians, noting the important changes made by the Acts of 1857 and 1859 in the status of proctors, and discusses the Judges of the Court of Admiralty, the Ecclesiastical Courts and the Probate and Divorce Courts.

The volume concludes with remarks on the leading members of the Privy Council.