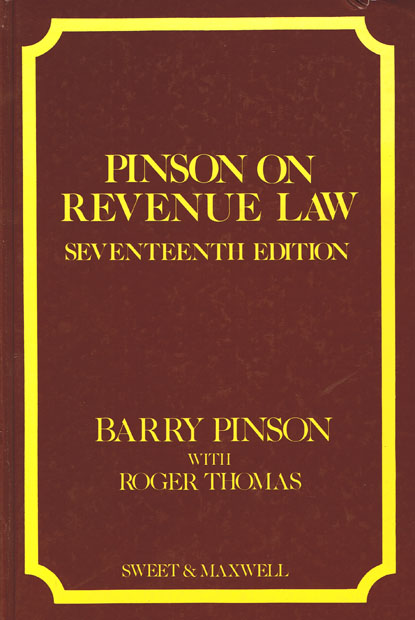 Since the first edition of this book appeared over 20 years ago the dimensions and complexity of revenue law have grown to such an extent that any book which now aims to be comprehensive will be bulky and may be unreadable.

This book does not aim to be comprehensive. It is offered as a statement of the firndarnental principles of revenue law and it aims to state those principles in as readable and intelligible a form as the subject-matter and the need for conciseness allow. The principles it states are those which practitioners in the field, whether lawyers or accountants, will need to have at (or near) their fingertips. The text will not reveal the solution to every problem but it is hoped that it will provide a useful starting point which will lead on to consideration of the statutes and cases and, where necessary, more detailed reference books.

No attempt has been made to theorise about taxation or to consider the law as it might have been or is in remote jurisdictions. The selection of topics aims to meet the needs of those who practise, or hope to practise, and who have to consider the impact of taxation on ordinary transactions.

The book is in five parts:-

This edition incorporates the changes in revenue law since the publication of the last edition, including those made by the Finance Acts of 1985 and 1986. These changes include the abolition of development land tax and the introduction of inheritance tax.

In the realm of case law, the Ramsay decision continues to create ripples of uncertainty for tax advisers while its implications and limitations are slowly worked out by the courts. The most recent cases are noted in Chapter 36.

I wish to express my thanks to my colleagues—to Roger Thomas who has updated or rewritten, as necessary, the chapters on value added tax, inheritance tax and stamp duties; and to Richard Fitzgerald, who made a number of valuable suggestions for the improvement of Chapters 14 and 15 (on companies).

Thanks are once again due to the many readers who have contributed by their criticism to the improvement of the book and to the editorial staff of Sweet and Maxwell who assisted in its production.