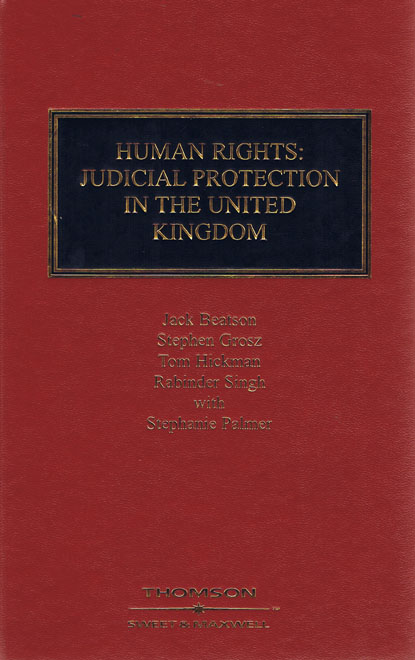 This new major work provides the practitioner with a comprehensive and discursive analysis of the Human Rights 1998 and the case law that has grown up around it since implementation.

Jack Beatson and Stephen Grosz are now joined by Tom Hickman, Professor Stephanie Palmer and Rabinder Singh QC to write a new book based on the earlier successful, Human Rights: The 1998 Act and the European Convention. This team is an unquestionably strong and well respected pool of leading Human Rights experts from practice and academia.

Whilst there are a number of books that concentrate on the various Convention articles, there is no detailed and authoritative treatment of specific sections of the Human Rights Act. Practitioners and academics needing guidance on issues such as the breadth of the courts' interpretative power under section 3 of the Human Rights Act, standards of review and Convention principles are forced to turn to academic journals. For the first time this material will be covered in a major human rights title.

Contents:
Introduction: the place of human rights in the laws of the United Kingdom
Common law rights in England NI and Scotland
The approach of the HRA
The status of the Strasbourg jurisprudence
Devolution statutes
EC Law
Other statutes
Influence of comparative law
The convention principles and the approach of the Strasbourg Court
Status of jurisprudence in UK law
Understanding Strasbourg jurisprudence
The convention values
General principles of interpretation
General principles in domestic law
Interpreting the Convention in Domestic Law
Interference with a protected right
Legality
Proportionality, equality and other standards
Weight, deference and latitude
National security
Scope of protection of the HRA
Public authorities
Victims
Retrospective effect
Horizontal effect
Impact of the HRA on legislation
Decision making by public officials: impact of human rights principles
Scope of section 3
Approach to section 3 interpretation
Declarations of incompatibility
Decision making by public officials: impact of human rights principles
Impact on law on decisions of public officials
Relationship between section 6 and section 3 of the HRA
Effect on substantive review: Wednesbury to proportionality
Effect of Article 6: independent determination of civil rights
Relevant considerations doctrine
The need of individual consideration
Legitimate expectations
Fairness and natural justice
Hearings
Bias
Tort
Effect of HRA on negligence liability
Effect of HRA on intentional tort claims
Remedies
Proceedings
The role of domestic remedies in the Convention system
Remedies generally
Damages
Other remedies
Remedial orders
Scotland, Northern Ireland and Wales