Maitland The Forms of Action at Common Law: A Course of Lectures 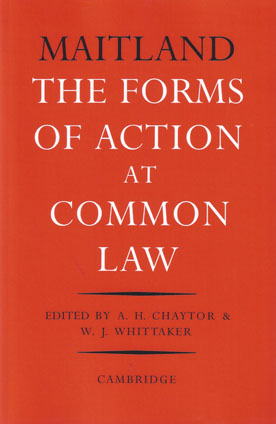 These lectures were first published in 1909, three years after Maitland's death. They were included in a volume entitled Equity, with a course of lectures on the subject. The following extract is taken from the editors' preface:-

To the twenty-one lectures on equity we have added seven upon the Forms of Action at Common Law, in order to present at the same time Maitland's account of the two systems which grew up side by side. here was the structure upon which rested the whole common law of England, and , as Maitland says the forms of action we have buried them but they rule us from their graves.

The evasion of the burden of archaic procedure and of such barbaric tests of truth as battle, ordeal and wager of law, by the development of new forms and new law out of criminal or quasi criminal procedure and the inquest of neighbour-witnesses has never been described with this truth and clearness.

He makes plain a great chapter of legal history which the learners and even the lawyers of today have almost abandoned in despair. The text of the chief writs is given after the lectures ...'