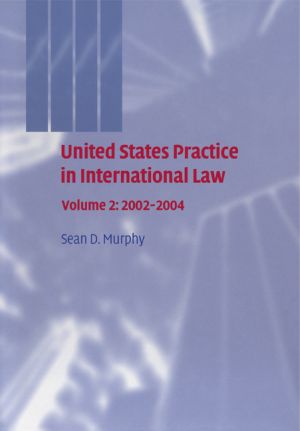 Sean D. Murphy's in-depth survey of U.S. practice in international law in the period 2002–2004 draws upon the statements and actions of the executive, legislative and judicial branches of the U.S. government to examine its involvement across a range of areas. These areas include diplomatic and consular relations, jurisdiction and immunities, state responsibility and liability, international organizations, international economic law, human rights, and international criminal law. This summary of the most salient issues during 2002–2004 (ranging from the treatment of detainees during the Afghan conflict in the spring of 2002 to the invasion and occupation of Iraq in 2003-2004) was originally published in 2006, and is a central source of information about U.S. practice in international law. Revealing international law in the making, this essential tool for researchers and practitioners is the second in a series of books capturing the international law practice of a global player.