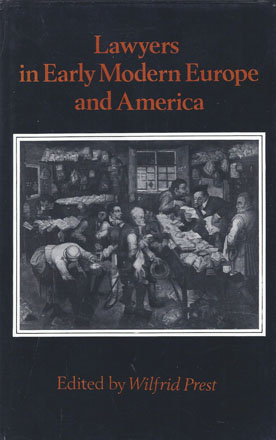 Historians have long acknowledged the importance of 'men of the law' both individually and collectively, in the political, cultural, economic and social life of Western societies.

However, it is only recently that a number of younger scholars have under-taken systematic investigation of the legal profession in early modern England, Scotland, France, Spain and Colonial America.

This book aims both to present a convenient conspectus of this research, much of it still unpublished, and to provide a comparative perspective on the place of the legal profession in Western societies before the Industrial Revolution.

The main themes covered by each contrib¬utor are: the status, number and vocational functions of the different classes or groups of lawyers; their social origins; education and career patterns; relations between lawyers and clients, other occupations and status¬groups and the state; the extent of legal 'professionalisation' and the role of lawyers as 'modernisers' in cultural, economic, political and social terms.