The Last Word: An Eye Witness Account of the Thorpe Trial 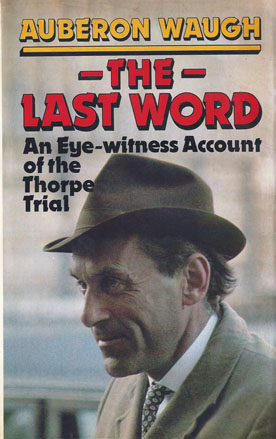 It was hailed in advance as "The Trial of the Century". Mr Jeremy Thorpe, a member of Her Majesty's Privy Council, former leader of the Liberal Party, public figure for over twenty years, was charged with conspiracy to murder a former male model who claimed to have had a homosexual relationship with him.

But when Thorpe was acquitted without having given evidence in his own defence, many people-felt they had heard only half the s!ory. A close study of the trial reveals many unexpected features. One of Britain's most brilliant writers, Auberon Waugh followed the drama from its very beginning when an idle rumour reached his desk at Private Eye, long before the mysterious dog shooting incident which gave rise to the charges.

As well as attending the Minehead committal proceedings, he also sat behind Thorpe and his fellow defendants throughout the Old Bailey trial.

Auberon Waugh gives us his own eye-witness account of the trial. His scathing wit and devastating judgments provide an ironic addition to the claim made by the trial judge, Sir Joseph Cantley: "Remember, I have the last word." Mr Waugh's book, which will prove a classic of trial literature, provides a unique insight into British justice as well as a stimulating guide to what actually happened in the Old Bailey.