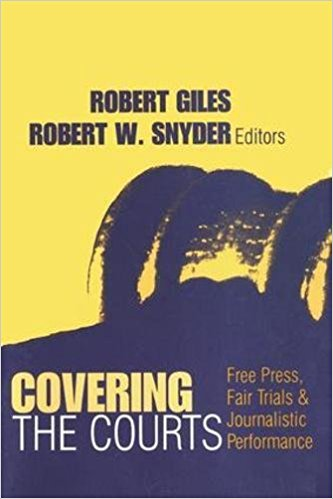 Covering the Courts shows how writers and journalists deal with present-day major trials, such as those involving Timothy McVeigh and O.J. Simpson. The volume features such outstanding contributors as Linda Deutsch and Fred Graham, and provides an in-depth look at the performance of the court in an age of heightened participation by reporters, camera operators, social scientists, major moguls of network radio and television, and advocates of special causes. The volume does far more than discuss specific cases. Indeed, it is a major tool in the study of the new relationships between a free press and a fair trial. Interestingly, a consensus is described in which the parties involved in efforts to balance freedom of the press and the right to a fair trial are moving in tandem. In this regard, sensitive issues, ranging from the universality of law to the particularity of racial, religious, and gender claims, are explored with great candor.

The volume also turns the intellectual discourse to its major players: the members of the press, the lawyers, and the judiciary. Has there been a shift from reporting functions to entertainment values? Does television and live presentation shift the burden from the contents of a case to the photogenic and star quality of players? What excites and intrigues the public: serious disturbances to the peace and mass mayhem, such as the Oklahoma bombings or sexual adventures of entertainment and sports fi gures? The fi ndings are sometimes disturbing, but the reading is never dull. This book will be of interest to journalists, lawyers, and the interested general public.