Writing Chinese Laws: The Form and Function of Legal Statutes Found in the Qin Shuihudi Corpus 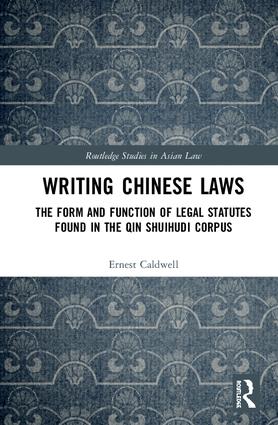 The legal institutions of the short-lived Qin dynasty (221 BCE-207 BCE) have been vilified by history as harsh and draconian. Yet ironically, many Qin institutional features, such as written statutory law, were readily adopted by subsequent dynasties as the primary means for maintaining administrative and social control.

This book utilizes both traditional texts and archeologically excavated materials to explore how these influential Qin legal institutions developed. Firstly, it investigates the socio-political conditions which led to the production of law in written form. It then goes on to consider how the intended function of written law influenced the linguistic composition of legal statutes, as well as their physical construction. Using a function and form approach, it specifically analyses the Shuihudi legal corpus. However, unlike many previous studies of Chinese legal manuscripts, which have focused on codicological issues of transcription and translation, this book considers the linguistic aspects of these manuscripts and thus their importance for understanding the development of early Chinese legal thought.

Writing Chinese Laws will be useful to students and scholars of Chinese Studies, as well as Asian law and history more generally.