The Lawyers: The Inns of Court: Home of the Common Law 2nd ed 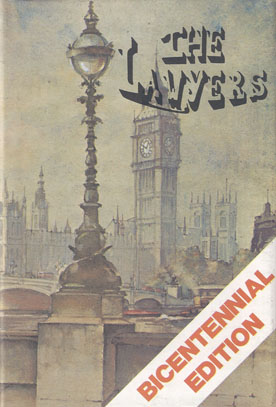 The Royal Commission on legal services has begun in earnest. No doubt members of both bodies will survive their ordeal.

Much water has flowed under the bridge of Father Thames since the first edition was published in 1971. Whereas the Temple itself has changed imperceptibly; the London Skyline grows ever newer and more daunting, and we 'all' grow perceptibly older. Indeed London Bridge has crossed the Atlantic (to a new mooring at Lake Havasu City, Arizona).

This edition attempts to cover new fields of the law outside the Temple. It is auspicious that moves are afoot, which if successful, will see the restoration of a fine old legal monument, Temple Bar - 'long associated with the Temple' and its return to London. Thus I have included what may seem of disproportionate length. (Temple Bar finally returned to London in 2004, 28 years later.)

I wish to thank particularly, Mr. Henry Summerfield, for his masterful contribution to chapters one, two, and three. His goodwill and that of our clerks, Mr Pike and Mr. Hayter, have been much appreciated. I am very grateful to the Bar Council for providing - in their many pamphlets - much information to Henry and me. Philip Gaudin, Information Officer to the Bar, in providing ideas and information in the writing of this book. I am asked to point out, and gladly do so, that the text as printed is my sole responsibility.

Thanks are more than due unto: Charles Puckett, for his collaborative guidance on the architectural buildings mentioned in the text, and especially Temple Bar, which is an old hobby-horse of his; Sir John Summerson, for his extreme kindness in lending a scholar's ear on the manuscripts; various colleagues in the four Inns, as also the Treasury Offices, who have assisted greatly; the typesetters "en bloc' whose production staff of Herts Typesetting Services Ltd (under the helm of Mr. Brian McCarthy) have prepared' this publication without sleeping for a week; and the unbreakable will of one Bill Palmer, the printer, and his good daughter Judy, without whose toil this book would have remained 'on the shelf'.

It goes without saying that Kenneth Sinkins of Wildy's remains the best publisher in the world. Perhaps Horace would have said of this all: Numerisque fertur Lege solutis.