The Book of the Bench: 39 Reproductions of Cartoons by 'Spy' and others. 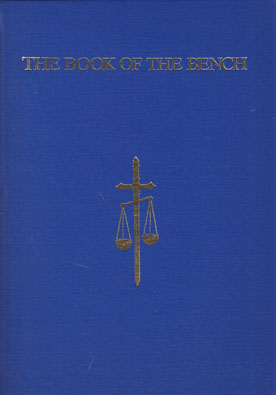 The Book of the Bench has always been popular since it was published in 1909. It is sought after chiefly for the 39 fine examples of Vanity Fair cartoons which it contains .

As all the subjects of these pictures were contemporary with the book's publication, we have added a few details to the 39 biographies to make them more complete together with the date and caption for the original Vanity Fair publication of each cartoon. This additional information is given within square brackets following the original biographical note which appeared in the 1909 edition .

Most of the subjects protrayed in this book were appointments made by Lord Halsbury . His Lord Chancellorship was noted for controversial appointments thought at the time as being merely political rewards though on the whole history has shown most to have been worthy and successful judges.

A larger royal quarto format vellum bound copy belonging to the artist, Sir Lesley Ward , and having his bookplate, has recently come to light. This was printed on a better quality paper but in the same typesett ing as other examples .

We hope this present edition , while making the prints more available at a fraction of the cost of the originals , will also prove an interesting glimpse of the Bench created by Lord Halsbury at the turn of the century .