The Snail and the Ginger Beer : The Singular Case of Donoghue v Stevenson 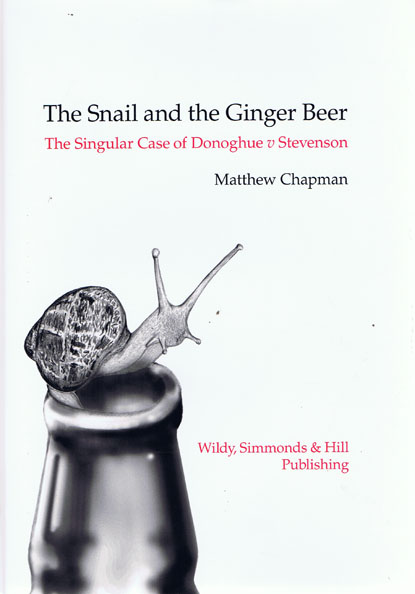 On an August evening in 1928 May Donoghue, a shop assistant, entered a café in Paisley. The circumstances of her visit made legal history. A ginger beer was ordered for Mrs Donoghue who famously complained that, to her surprise and shock, a decomposed snail had tumbled from the bottle into her glass. Mrs Donoghue sued for the nervous shock she claimed to have suffered as a result.

The question whether she had a case in law against the manufacturer of the ginger beer was argued as far as the House of Lords. It is hard to overstate the importance of the decision in Donoghue v Stevenson. It represents, perhaps, the greatest contribution made by English and Scottish lawyers to the development of the common law.

Donoghue v Stevenson made it clear that, even without a contract between the parties, a duty of care is owed by ‘A’ to take reasonable care to avoid acts or omissions which could reasonably be foreseen as likely to cause injury to his neighbour: ‘B’. This concept, developed by the great jurist Lord Atkin, has become known by the universal shorthand, ‘the neighbour principle’. Who, Lord Atkin asked rhetorically, is ‘in law’ my neighbour? Donoghue v Stevenson provides the answer.

The Snail and the Ginger Beer tells the full story of this remarkable case. It provides vivid biographical sketches of the protagonists and of the great lawyers who were involved in the case. It sets Donoghue v Stevenson in its historical context and re-evaluates the evidence. The roots of the neighbour principle are excavated in the parable of the Good Samaritan and the case law of the United States.

The constitutional importance of the case is also dealt with; the blow it struck for a moral approach to the law which departed from a rigid doctrine of precedent. Finally, the book investigates the influence of Donoghue v Stevenson across the common law world: from the USA to the countries of what is now the Commonwealth.

Contents:
List of Illustrations
Notes and Acknowledgements
Prologue
1. Mrs Donoghue Travels to Paisley
2. Into the Scottish Courts
3. In the House of Lords
4. A Legal Cast List: Judges and Lawyers
5. Roots of the Neighbour Principle
6. Home Reaction
7. Into the Common World
8. Conclusion
Selected Bibliography
Index