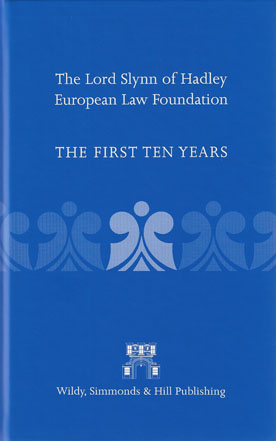 The Lord Slynn of Hadley European Law Foundation was created in 1999, on the initiative of His Honour George Dobry CBE QC, to provide support, advice and training for the judiciary and the legal profession in countries in Central and Eastern Europe who were then aspiring to become members of the European Union. Many of these countries are now members.

A number of countries still remain outside the European Union. At the present time the Foundation is engaged in seeking to help those countries, and also any countries inside the Union that is seeking our assistance, in collaborative projects directed mainly to the following themes – judicial independence and the rule of law, human rights law, EU law and practice, and mediation and other forms of ADR. In addition, the Foundation awards fellowships to enable promising young lawyers from other countries in the European Union to study and work for a period in the UK. The Foundation was named after Lord Slynn in recognition of his outstanding contribution to the development of the principles and practice of European law.

The Foundation arranges Lectures from time to time given by eminent speakers on subjects that are of interest and importance to lawyers in the European Union. This book contains the lectures from the first ten years along with memorials to Lord Slynn and his accomplishments.