Dissenting Judgments in the Law 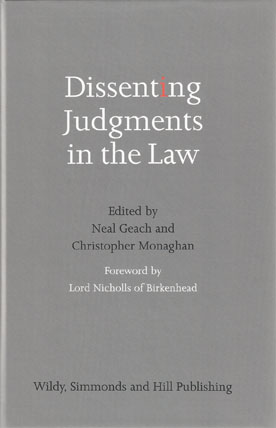 In Dissenting Judgments in the Law a team of expert contributors reassess nineteen landmark cases from different areas of the law, each of which had the potential for the law to have developed in a markedly different direction.

The cases have been selected on account of their continued relevance to the law today or the controversial nature of the majority’s decision. A key feature of each case was a dissenting opinion from a judge who thought that the law should develop in a different direction.

The aim of the contributors is to re-evaluate important cases, such as:-

by assessing the merits of the judgements given, before deciding whether the law would, in fact, have been better served by following the dissenting opinion rather than that of the majority of judges in the case.

The judicial reasoning in each case is explored in depth and is contrasted with differing approaches in other jurisdictions. Where relevant, a comparative analysis is employed in order to show how the law, by not following the dissenting opinion, has developed out of step with other common law jurisdictions.

Each contributor then sets out what impact the dissenting judgment might have had on the law if it had decided the case and assess where the law in that particular field would be today.

"A highly thought-provoking book which will reach out to the law student, the practitioner and the jurisprudent for the excellence of the controversies set out" Phillip Taylor, Richmond Green Chambers

Contents:
Contributors
Foreword
Preface
Acknowledgements
Table of Cases
Table of Statutes and Secondary Legislation
Table of International Materials
Part I – Tort Law
1.
The Nuisance of the Proprietary Interest
2.
Re-establishing the Search for Principle
3.
Loss of Chance
4.
Do Corporations Have an Immortal Part? – The Need to Prove Damage in Corporate Libel
Part II – Company and Commercial Law
5.
Upholding Contractual Intentions
6.
A Defence of Commercial Certainty in the Wake of Judicial Pragmatism
7.
Through the Looking-Glass and What Alice Found There
8.
Removal of Directors
Part III – Equity and Property Law
9.
Fiduciary Conduct – A Tailored Application
10.
The Banker’s Perspective
11.
Discounting Fiscal Privilege – A More Charitable Solution to the Public Benefit Question
12.
Taking a Witch’s Brew and Making a Consommé
Part IV – Public Law
13.
Show me the Precedent! – Prerogative Powers and the Protection of the Fundamental Right not to be Exiled
14.
Contracting out of the Human Rights Act 1998
Part V – Crime and Criminal Procedure
15.
Restricting the Meaning of ‘Appropriation’ under the Theft Act 1968 – A Cool, Calm and Rational Approach to the Issue of ‘Stealing’ A Perfectly Valid Gift
16.
How Far is too Far? – The Extent to which Consent is a Defence to Non-fatal Offences Against the Person
17.
Protecting the Secret Deliberations of the Jury in the Interests of Efficiency – Has the Law ‘Lost its Moral Underpinning’?
18.
Restricting Compensation for Miscarriages of Justice to the Truly Innocent
Part VI – American Perspectives on Dissent
19.
‘Three Generations of Imbeciles are Enough’ – The Eugenics Case