This book is now Out of Print.
A new edition has been published, the details can be seen here:
The Old Munster Circuit isbn 9780854901579 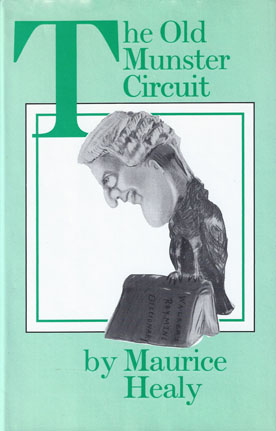 
One of Ten Literary Classics chosen by Gary Slapper in The Times Student Law Supplement of 18.10.2005. He writes:-

''Literature with a legal content is extensive and highly varied. The law is interwoven with all life, and students wishing to excel at law should read widely. The more styles, forms and epochs of literature you read, the better.'' Of The Old Munster Circuit he says

A charming unstructured anthology of humorous legal anecdotes from Ireland. The stories include instances of judicial severity like that of Lord Justice Holmes’s sentencing an old man from a farming community to 15 years. The convict cried for mercy saying he would not live to finish the sentence. “Well,” said the judge, “try to do as much of it as you can!”

The contribution of litigants is also well documented, such as that of the defendant in a case about the allegedly unfair sale of a horse. Examining the ethics of horse-dealing, the judge barked at the defendant: “That’s not what you told (the purchaser) at the Bandon Fair.” “Oh no, but I'm on me oath now” came the reply which won him the case. ''

This edition also contains a Biographical Introduction by Charles Lysaght