This book is now Out of Print.
A new edition has been published, the details can be seen here:
The Telephone Murder: The Mysterious Death of Julia Wallace 2nd ed isbn 9781909976566

The Telephone Murder: The Mysterious Death of Julia Wallace 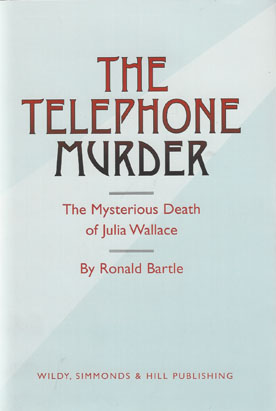 The Wallace Case is one of the most notorious murder cases of all time. The issue of whether Wallace was guilty or innocent of his wife’s brutal murder has been the subject of conjecture among lawyers, criminologists and writers for years. Eighty years on, the case remains unsolved. For several commentators the murder of Julia Wallace was the ‘perfect murder’.

William Wallace was a mild-mannered insurance agent, who lived in apparent harmony with his wife, Julia. One evening he attended his chess club to be informed of a telephone message requiring him to visit the caller the next day on a matter of insurance business. Wallace knew neither the address nor the name which the caller had given, but set out, the following day, to keep the appointment.

After a long and fruitless search for the house, during which he enquired of nine people, two of whom told him that there was no such address, Wallace returned home to find his wife had been brutally murdered by a series of violent blows to the head from an instrument that was never found. Exhaustive police enquiries drew a complete blank. Detectives came to the view that Wallace himself had made the phone call, using a disguised voice.

The phone call, they believed, had been used to create an alibi for the murder which he had committed before he left home. Despite his protestations of innocence, Wallace was duly arrested and charged with the murder of his wife.

At the trial, notwithstanding a favourable summing up by the judge, the jury found Wallace guilty. However on his appeal the Court of Criminal Appeal reversed the guilty verdict and the case against him was dismissed. Wallace subsequently wrote about this ordeal, naming for the first time, another suspect. He died in 1933 and was buried next to his deceased wife.

In The Telephone Murder Ronald Bartle brings alive this dramatic and challenging case, whilst carefully considering the points both assisting the prosecution and those in favour of the defence.

This is the crime that Raymond Chandler ranked as the greatest murder mystery in the annals of criminal history.