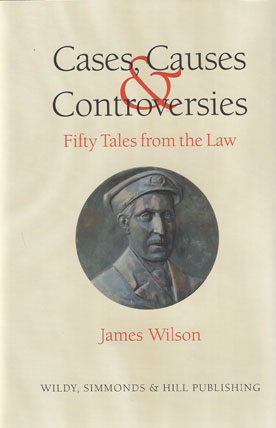 What do Prince Charles, Bette Davis, Sir Ian Botham, Mrs Victoria Gillick and a man whose family grave appeared in the background of a splatter horror film have in common?

Each of them felt they had been wronged in some way, and each went to court to try and do something about it. Sometimes their case was a purely private argument. Others brought cases of national importance, or claims which raised acute moral and ethical principles. Some won handsomely, while others lost so badly that they ended up far worse than when they started.

This new book looks at fifty legal disputes from Victorian times to the present day, where a compelling moral or legal issue was at stake, or where the background to the case was interesting, amusing or infuriating.

It begins with three Victorian murders, including the law student favourite of R v Dudley and Stephens, the case of shipwrecked sailors eating the cabin boy and later facing trial for his murder.

It then covers cases ranging from the early days of Hollywood and both world wars, through to modern day battles over superinjunctions, MPs’ expenses, the vexed relationship between religion and law, and the sometimes hazy relationship of law and sport.

Some of the stories border on the absurd. Why did the legendarily tough international sportsmen Ian Botham and Allan Lamb show no fear in the face of hostile fast bowling on the pitch, yet go to their lawyers when their old opponent Imran Khan said something they didn’t like in a newspaper?

Irony runs through many of the cases. Bette Davis was left penniless after losing her case in England and felt she had no option but to return to America and resume working for the studio she had unsuccessfully sued. But after doing so she became one of the richest and most and acclaimed actresses in history. In other cases the irony is less happy: the indigenous rights campaigner Eddie Mabo won a great victory for his people, but was shunned by them during his lifetime and never lived to see his final legal victory.

Then there are the outright tragic: the execution of the civilian Charles Fryatt by the Germans during the Great War, for example, shocked not only his own side but neutral observers of the day as well. In modern times, the blameless good citizens Dianne Pretty and Debbie Purdie were stricken with terminal illnesses and were forced to seek legal approval for their desire to end their lives at a time of their own choosing.

Written in a clear, accessible style, free of legal technicalities, the book will be of interest not simply to lawyers but to anyone interested in stories of great human interest and how the legal system tried to deal with them.

The accounts of each case are interesting and include something new for everyone." The Law Gazette

Contents:
I. Victorian murders
1. A Victorian murder-mystery
2. Escaping the noose
3. Death and necessity
II. Hollywood on trial
4. Template for the pitfalls of fame
5. A most specific performance
6. A fugitive seeks justice
III. Law and war
7. A duel on the high seas: the Alabama claims
8. Death of a civilian hero: the murder of Captain Charles Fryatt
9. The death of Private Harry Farr
10. Be careful what you wish for
11. An innocent abroad
12. Witchcraft during wartime
13. Military history on trial
14. Lawyers, guns and money
15. A missed opportunity: the Chilcott Inquiry
16. Nothing to see here: the Libyan intervention
17. A modern day conchie
IV. Personal battles
18. Negative returns
19. Revenge of the Mer man
20. Unmitigated tragedy
21. Sticks and stones
22. A non-vintage case
V. Religion and the law
23. Disregarding the faith
24. God behind bars
25. No freedom of speech
26. France’s Burqa ban
27. Aiden O’Neill QC on religion and the law
VI. Public law: the state in a state
28. A simple title, an impossible task
29. A modern scandal
30. Prisoner voting and the power of Strasbourg
VII. The press and the public
31. The shrinking of Fleet Street
32. A deadly secret
33. Zombies invade the High Court
34. It ain’t over till it’s over
35. The Prince and the Chinese Takeaway
VIII. Sport and the law
36. The delight of everyone
37. Not cricket
38. Cricketing convictions
39. John Terry, free speech, sport and the law
40. An ignoble day for the noble art
IX. Crime in our time
41. Looking for trouble
42. When the press oppress
43. Sentencing rioters
X. Private and public battles: civil law
44. The foul-mouthed gardener
45. ... the greatest piece of judicial law reform in my lifetime ...;
46. Old Number One or New Number One?
47. What’s in a name? Another vintage Bentley case
48. (Not) Breaking the law
49. A lack of common sense
50. Laying the blame
Afterword