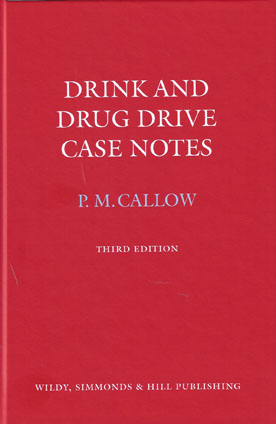 "This book…is very good. The first thing which is striking about the text is the ability to locate the salient points from each case…one is presented with a clear layout and structure of the circumstances of the case, the question for the court and the decision made, with a brief summary at the start of each case…extremely useful when researching a specific area of law. Of particular merit…is the almost exclusive use of judgments when relaying the decision that was made by the court. The judgments are relayed in part, but only the part essential to the dictum of the judge – useful when drafting a legal argument. In summary this book is extremely useful when defending or prosecuting cases involving drink or drug driving." The Law Gazette

Many thousands of people are prosecuted each year for drink and drug driving offences. The legislation favours the prosecution in a number of ways, for example, by requiring those under investigation to give evidence against themselves in the form of specimens of breath, blood or urine, but also affords certain safeguards to suspects. The conviction rate is exceptionally high, and the provisions have given rise to a wealth of case law.

Drink and Drug Drive Case Notes comprises summaries of the many cases on drink driving, and the fewer cases on drug driving, which have come before the High Court, the Court of Appeal, the House of Lords and, in one instance, the Supreme Court.

Over six hundred judgments are summarised. Each note is presented as a short statement of the facts of the case, the question(s) put to the appeal court and an extract from the judgment. The notes are intended to provide a broad outline of the trends in the case law and as starting points for readers seeking guidance on particular issues.

This third edition includes notes of some seventy-five cases decided since the second edition was published. Themes running through the new cases include the interpretation of the provisions on reasonable cause to believe that the breath analysis device has not produced a reliable indication of the suspect’s breath alcohol level, and on the application of the Criminal Procedure Rules to proceedings for drink and drug driving.

At the time of publication, the so-called “statutory option” has just been removed, and section 5A of the Road Traffic Act 1988, creating new offences of driving, attempting to drive, and in charge, with a concentration of a specified controlled drug above a specified limit, has come into force. The offences are framed in much the same terms of the excess alcohol offences, but testing will be by the analysis of blood or urine only. While much of the case law concerning drink-driving will be relevant, the new provisions will no doubt give rise to their own body of case law in due time.

"As a reference guide, this is an extremely helpful addition to a legal adviser’s kitbag.”

The Justices’ Clerk, of the first edition

“An extremely useful complement to any standard text book on drink driving matters. I would commend it not only to defence lawyers but also to those who prosecute in this area of law.”

Solicitors Journal, of the second edition

Contents:
Chapter 1 The Requirement to Provide Specimens
Chapter 2 Replacement Specimens: Lower Breath Reading No More than 50
Chapter 3 Specimens for Laboratory Testing
Chapter 4 Failing Without Reasonable Excuse to Co-operate or to Provide Specimens
Chapter 5 Reasonable Excuse
Chapter 6 Challenging the Breath Testing and Breath Analysis Devices
Chapter 7 The Assumption that the Proportion of Alcohol or a Drug at the Time of the Offence was not Less than in the Specimen
Chapter 8 Evidence;
Chapter 9 Definitions
Chapter 10 Defences
Chapter 11 Special Reasons
Chapter 12 Other Issues
Appendix Road Traffic Act 1988, Sections 3A to 11; Road Traffic Offenders Act 1988, ss 15, 16, 34