Marshall Hall: A Law Unto Himself 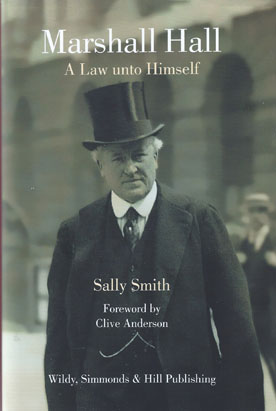 Foreword by Clive Anderson Sir Edward Marshall Hall KC saved more people from the hangman’s noose than any other known barrister. In an age of inadequate defence funding, minimal forensic evidence, a rigid moral code making little allowance for human passion and a reactionary judiciary, his only real weapons were his understanding of human psychology and the power of his personality.

His charismatic oratory and film star profile made him an Edwardian celebrity. Jurors collapsed and judges wept at the overwhelming power of his performances. Thousands congregated to await the verdicts in the trials in which he appeared for the defence. Curtains were brought down in West End theatres to announce the acquittals he secured.

His famous trials included the Camden Town murder, Seddon the Poisoner, the Brides in the Bath, the Green Bicycle Murder and the Murder at the Savoy. As a result of his oratory in these he was adulated as an entertainer, his performances greeted with the same relish as those by the great actors; but he was also loved as a champion of the underdog, who almost single-handedly introduced compassion in to the Edwardian legal system. No other barrister in any age can claim such celebrity, nor such public adoration and affection.

Meticulously researched, the Bestselling, Marshall Hall: A Law unto Himself is the first modern biography of a complex and influential man and, as a result of access to new material:

She seeks to explain this forensic phenomenon and with zip and vivacity she succeeds. From a review by Alan Moses in The Times Literary Supplement

Sally Smith more than does justice to the extraordinary life of this complex man, with its ups and downs, its stresses and strains, its triumphs and occasional disasters. Her book is not only the portrait of a man, but also of an age and a profession the like of which we will never see again. There have been and will be other great advocates, but the raw battle for the life of an accused in the shadow of the noose is something that now belongs to history. It was a battle at which Marshall Hall excelled. Paul Magrath ICLR Review

He brought with him a strange magnetic quality that made itself felt in every part of the court. The spectators stirred with excitement and a faint murmur ran from floor to gallery. When he addressed the judge, it was seen that to his great good looks there had been added perhaps the greatest gift of all in the armoury of an advocate - a most beautiful speaking voice. Norman Birkett

My father remembered Marshall Hall, and it was his dramatic entry into a courtroom that impressed him. His head clerk would come in carrying the brief and a pile of white linnen handkerchiefs, then came a second clerk with the water carafe and an air-cushion.

Sir Edward himself would then burst through the swing-doors to be installed firmly in place by a flurry of solicitors and learned juniors. He would subside on to the inflated rubber circle and listen to the case for the prosecution. If the evidence against Marshall Hall's client looked black he would, so my father assured me, slowly unfold the top handkerchief and blow, a clarion call to battle.

When the situation became desperate he would remove the air-cushion and reinflate it, a process which always commanded the Jury's undivided attention. John Mortimer