This book is now Out of Print.
A new edition has been published, the details can be seen here:
Judicial Precedent and Arbitration: Are Arbitrators Bound by Judicial Precedent? 2nd ed isbn 9780854902576 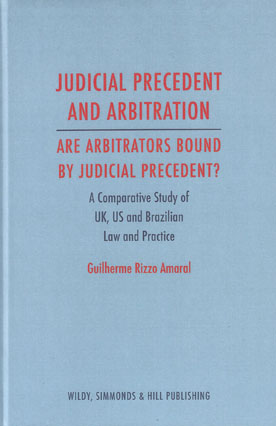 Furthermore, there is no hierarchy between arbitral tribunals and judicial courts, nor are arbitrators part of any judicial system. Thus, if arbitrators are not part of any hierarchical scheme and if there is no challenge or appeal available against their errors of law, how could one say that arbitrators have a duty to follow judicial precedents?

Besides, when individuals agree to solve their disputes outside the judicial arena, should they expect a private arbitrator to abide by the same standards of a system they have just avoided? Is the choice for arbitration not a choice for an entirely different legal system, unbound by the so¬called judge-made law?

This book attempts to answer those questions by presenting a comprehensive guide to the relation between judicial precedents and arbitration in the United States, the United Kingdom and in Brazil, as well as in international arbitration as a whole

Contents:
Acknowledgements
Abbreviations;
Table of cases;
Introduction
PART 1 – PRECEDENTS AND ARBITRATION;
A. Precedents;
1. The Nature of Precedent;
a. Persuasive precedents and binding precedents;
2. A brief note on the distinction between civil law and common law approaches to precedents;
a. Civil Law and the case of Brazil;
b. Common law;
3. Judge-made law vs. statutory law;
B. Arbitration
1. The Nature of Arbitration;
a. Domestic arbitration;
b. International arbitration;
c. Conclusion: the common ground;
C. Judicial Precedents and Arbitration;
1. Common law;
a. Precedents and their binding effects on arbitrators;
b. Arguments against binding effects;
2. Brazil;
a. Arguments against binding effects;
i. Predictive (or realist) approach;
ii. Systemic approach;
iii. Utilitarian (or pragmatic) approach;
iv. Literal approach;
v. Yet another literal approach;
b. Arguments in favour of binding effects;
i. Overview;
ii. Why do precedents bind?;
iii. Which precedents bind?;
iv. When do precedents bind?;
v. Opting out of precedents;
3. A brief note on international arbitration: the legitimacy debate;
a. Judicial precedents and international arbitration;
PART 2 – VACATING ARBITRAL AWARDS BASED ON THE DISREGARD OF PRECEDENTS;
A. A parallel between disregarding the law and unauthorised decisions in equity, ex aequo et bono or as amiable compositeur;
B. Common law;
1. The United States and the manifest disregard standard;
a. The FAA;
b. Wilko v. Swan (1953);
c. Hall Street (2008);
d. The circuit split on manifest disregard;
e. Conclusion;
2. The United Kingdom and the appeal on point of law;
a. Sections 67 and 68 of the EAA: lack of jurisdiction and serious irregularity; b.
Section 69 of the EAA: Appeal on point of law;
i. The question of law;
ii. Requirements for the appeal on point of law;
iii. Remedies pursuant to Section 69;
c. Conclusion;
C. Brazil;
1. For a clear standard of review: conscious disregard of binding precedent;
2. Annulment suit;
3. Denying enforcement to domestic awards;
4. Reclamação;
D. Recognition and enforcement of foreign arbitral awards: the New York Convention and the disregard of precedent
1. Brazil;
2. United States;
3. United Kingdom;
4. Conclusion;
CONCLUSION;
BIBLIOGRAPHY;