The Government of Ghana and International Arbitration 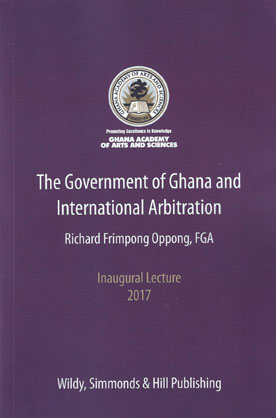 Since the dawn of the twenty-first century, at least twelve international arbitration claims have been submitted against the Government of Ghana (GoG). This is a significant number compared with what had previously been the case.

To date, there has been little or no academic study involving the claims, the arbitral awards resulting from them, and their implications for Ghana. This book aims to fill that void. It examines GoG’s experiences with international arbitration. It draws on lessons from those experiences, as well as the comparative insights extrapolated from other jurisdictions.

The book, the 2017 Inaugural Lecture for the Ghana Academy of Arts and Sciences, focuses on arbitration between GoG and private foreign individuals, firms or corporations. It does not deal with interstate arbitration. The book examines:-