A Victorian Tragedy: The Extraordinary Case of Banks v Goodfellow 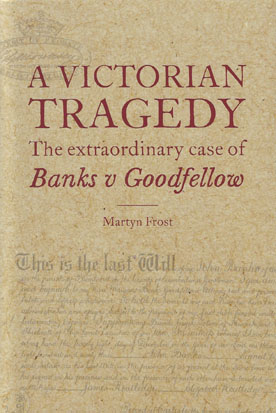 A Victorian Tragedy, for the first time, describes how the landmark court case of Banks v Goodfellow (1870) came about, what happened to the protagonists and how an enlightened judgment provided a practical definition of testamentary capacity that has since been used throughout the common law world law. This fascinating story is set against the backdrop of the mid-Victorian world and how it affected the lives of those caught up in the case.

Set in the Lake District, around Keswick, the central issue was the mental illness of the testator, John Banks, and how he coped with living in a world that often derided his paranoia – “From the appearance of the man anyone would take him for a person out of his mind” as a local clergyman put it. The lives of John’s relatives were scarred, and often ended early, by other illnesses common at that time, but these lives also interweave with 19th century issues of emigration, marriage reform and early mortality.

Extensive use is made of original court papers and contemporary newspaper reports, both from the national and local press, to present the picture that was placed before the court of how John Banks was affected by his insane delusions. The conduct of the Assize court hearing is explained, together with how the court and jury dealt with the radically opposed evidence from either side.p>

A Victorian Tragedy covers this case in detail not previously dealt with before and offers a different approach to re-evaluate an important case in the context of its time and the treatment of the insane in the 19th century. While the book will undoubtedly appeal to lawyers, the book’s portrayal of a mid-Victorian family and the treatment of the insane will also be of interest to the more general reader.