The Drink- and Drug-Drive Offences: A Handbook for Practitioners 2nd ed 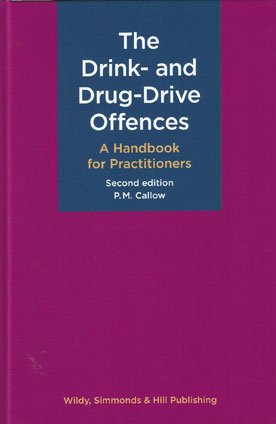 The provisions on drink-and drug- driving, and their statutory predecessors, have undoubtedly contributed to greater road safety. The conviction rate is extremely high, running at 95 per cent.

The consequences of conviction for a drink- or drug-drive offence go beyond the immediate penalty of a fine, a community penalty or imprisonment. They include disqualification from driving, which may not simply inconvenience the offender, but may lead to loss of employment and, in due course, to greatly increased insurance premiums.

Since the first edition of this book was published in 2011, there have been two major changes. First, the new section 5A of the Road Traffic Act 1988 came into force in March 2015 and created the offences of driving, attempting to drive or being in charge with a concentration of a specified controlled drug above the specified limit for that drug.

This second edition includes new material which describes the new offence. As far as possible, the provisions under s 5A mirror those relating to excess alcohol, but the seventeen drugs in question are very different from alcohol, and from each other. The law on s 5A is no doubt set to develop over the years to come. Secondly, the so-called ‘statutory option’ has been removed (except in Northern Ireland, the Isle of Man and the Channel Islands).

The new edition of The Drink- and Drug-Drive Offences: A Handbook for Practitioners (formerly The Drink-Drive Offences: A Handbook for Practitioners) provides a practical, comprehensive, accessible and up-to-date account of this broad area of law. The book brings together the statutory provisions and the case law on the drug- and drink-drive offences, elucidating issues which are often surprisingly difficult.

It is intended for all practitioners concerned with this area of law, whether police, prosecution or defence, and adopts a neutral standpoint between their various interests.

Contents:
1. INTRODUCTION
The background
The offences
The investigation
Definitions
Use of specimens in proceedings
Trial
Penalties
The MG DD forms
The Crown Prosecution Service
Railways, tramways, shipping and aviation
2. PRELIMINARY TESTS
Introduction
Stopping of vehicles
Trespass and bad faith
The prerequisites
Preliminary breath test
Preliminary impairment test
Preliminary drug test
Power of arrest
Power of entry
Time for caution
3. BREATH SPECIMENS
Introduction
The power to require specimens
The place at which specimens may be required
The breath analysis device
The procedure for requiring specimens
Lower breath reading to be used
Conclusion of the breath analysis procedure
4. BLOOD AND URINE SPECIMENS
Introduction
The place at which specimens may be required
Medical reasons why breath cannot be provided or should not be required
Device unreliable, unavailable or impracticable to use
Device not having produced a reliable indication
Specimens for drug testing
Relationship between blood and breath specimens
Choice of specimen: blood or urine
Time for providing urine specimen
Failing without reasonable excuse to provide
The statutory warning
Consent to the taking of a blood specimen
The procedure for making the requirement
Taking and dividing the specimen
The analysis
Detention following the procedure
5. INCAPACITY TO CONSENT AND HOSPITAL PATIENTS
Persons incapable of consenting
Hospital patients
6. CAUSING DEATH
Introduction
Causing death
Driving without due care and attention
Driving inconsiderately
Other persons
Unfit or with excess alcohol or drugs
Failure to provide specimens
7. UNFITNESS TO DRIVE
Introduction
The meaning of ‘unfit to drive’
Evidence of unfitness
‘Drink or drugs’
‘Drug’
Arrest
No likelihood of driving
8. THE EXCESS ALCOHOL AND DRUGS OFFENCES
Introduction
‘Drives’
Attempting to drive
Motor vehicle
Road
Other public place
Consuming
The prescribed and specified limits
The statutory assumption
The exception to the statutory assumption
‘Back calculations’
Aiding and abetting
Excess drugs: the medical defence
The defence of duress or necessity
The defence of insanity
9. THE ‘IN CHARGE’ OFFENCES
Introduction
In charge
Likelihood of driving
No likelihood of driving
10. THE ‘FAILING’ OFFENCES
Introduction
The offences
The elements of the offences
The burden of proof
The meaning of ‘fail’
‘Reasonable excuse’
Circumstances which constitute reasonable excuse
Whether requirement made
Warning of the consequences of failure
11. TRIAL, EVIDENCE, PROCEDURE
Mode of trial
The information
Documentary evidence concerning specimens
Disclosure
The MG DD forms
Adjournments
Video recordings
Identification
The discretion to admit or exclude evidence
Advice, assistance and representation
The justices
Re-opening the prosecution case
Stay of proceedings
Alternative verdicts
Appeals
12. PENALTIES
The penalties
Personal mitigation
Guilty pleas
Ancillary orders
Purported rescission of sentence
Costs
13. SPECIAL REASONS FOR NOT DISQUALIFYING
Introduction
Evidence
Special to the offence: the four criteria
The seven-point checklist
The distance driven and the degree of danger
Emergencies
Laced drinks
Other special reasons
Failing to provide specimens
Argument available once only
The discretion not to disqualify
Summary
Index