This book is now Out of Print.
A new edition has been published, the details can be seen here:
Chambers Asia Pacific 2019: Asia Pacific's Leading Lawyers for Business isbn 9780855145316 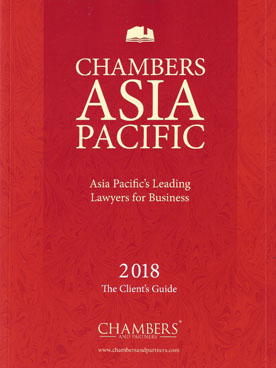 
Chambers Asia-Pacific covers 41 jurisdictions, from the Central Asian region to Japan, from Mongolia to the South Pacific.

The guide’s most developed jurisdictions include Australia, China, India, Japan and Singapore, where we feature around 20 separate areas of law. We also cover the region’s smaller jurisdictions, including the fast-growing markets of Myanmar and Mongolia, as well as nine Pacific Island nations (with Papua New Guinea as a separate chapter).