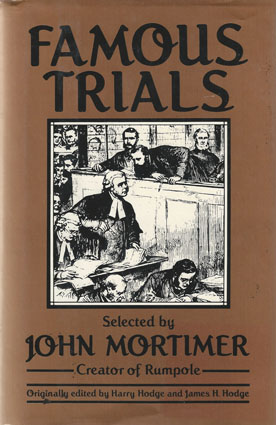 John Mortimer, creator of the irrepressible Old Bailey hack, Rumpole, has made this selection from the classic Penguin Famous Trials series, originally edited by Harry Hodge and then, his son, James Hozier Hodge. The selection vividly brings out the dark side of respectable middle-class England.

Again and again, repressed sexuality is the theme of these trials, whether seen directly in the young case of the ladies lured by George Joseph Smith's physical magnetism to his deathly bath-tub, or obliquely in the murder of the prostitute Olive Young, battered to death as she went about her quiet and orderly business in a basement flat in Fulham.

But another subject emerges from the accounts of these trials, and that is the English legal system itself. The judicial process is shown in all its splendour and shabbiness, from the immortal advocacy of Marshall Hall, securing an acquittal by proving that Sergeant Grosse had misrepresented the street lighting in St Paul's Road, to the various judgments which upheld Lord Haw-Haw's conviction although the alleged offences were all committed abroad and he was never a British subject.

Husbands and wives, lovers and prostitutes, children and parents ... and, of course, lawyers and clients. They all throng these pages, and as the drama of their lives unfolds, the truth proves itself far more compelling than any fiction.