The Law of Torts in New Zealand 7th ed 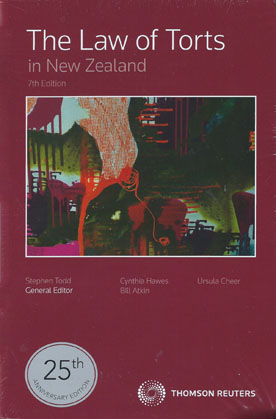 
The 7th edition of The Law of Torts in New Zealand marks the passage of 25 years since the book was first published in 1991.

As with previous editions, it seeks to explain and to discuss the evolving law in New Zealand and also to cover significant developments in the wider common law world. The work ensures that the relevant rules and principles of tort law are assessed in the light of their objectives and likely consequences, and the policies underlying the law are given close attention.

The new edition encompasses a number of significant developments in the law. Since mid-2005 when the fourth edition was published, there has been a stream of new decisions on torts, with major developments in various aspects of negligence, the economic torts, breach of confidence and the protection of privacy, defamation, Bill of Rights litigation and the award of damages.

The Law of Torts in New Zealand is the definitive tort work for law students and practitioners. Its exemplary standards and authoritative reputation are both demonstrated by the fact that it is the book that is most frequently cited in decisions of the New Zealand courts.