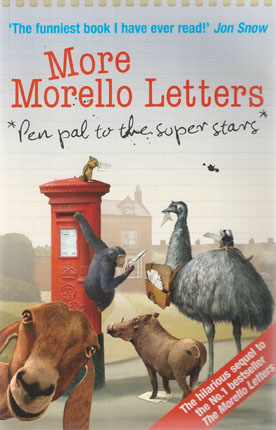 Duncan McNair is the youngest of 7 children of a renowned Second World War fighter pilot. He is a well-known lawyer conducting high profile commercial and human rights cases in the High Court and the European courts.

Duncan is also Mr and Mrs Morello, their three idling kids, Professor Wedbetter, the Reverend Scrimshaw DD, Noleen O'Riordan, Mr Derek Hardstaff MA (Oxon) and many other characters including several goats from Morello's Menageries whose views are related through the pages The Morello Letters - Pen pal to the super stars.

Being a goat, emu or gerbil is something Duncan takes in his stride. "As the smallest of a large and boisterous family" explains Duncan "much of my youth was spent in headlocks at the instance of one or other of my siblings for a variety of misdemeanours. Learning whilst restrained to utter a range of animal noises proved useful in attracting help or if that failed in amusing my assailants into loosening their grip. I haven't looked back since."