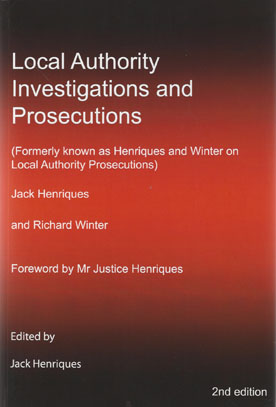 
The second edition of this book sets out the full investigation and prosecution process in much greater detail. There has been an increased emphasis on the needs of investigation officer.

It is expected that anyone with little or no knowledge of investigatory work should be able to carry out an investigation from complaint to court with the assistance of this book. Experienced officers and lawyers will also benefit from some of the finer points of.evidence and procedure that are not commonly known.

The systematic approach to investigations is continued with more check lists to ensure quality and a greater emphasis on speed and efficiency. Officers who read the book are likely to spend less time preparing cases and present their evidence in court in a much clearer and simpler way.

Since the last edition was published the editor has trained as many as 12-1500 delegates a year at peak training times and the knowledge gained in that process has led to discovery of a number of serious weaknesses that are common to a very large percentage of investigators at all levels. This work demonstrates how a few well directed inquiries are likely to expose many of these weaknesses.

It has been frequently said by many lawyers that the first edition was their bible. The latest edition embodies in excess of 25°/o more knowledge in terms of word count and a number of new chapters with others significantly re-written and updated.

In short the book is intended to include everything a Local Authority officer needs to know to prepare cases with a high degree of competence.