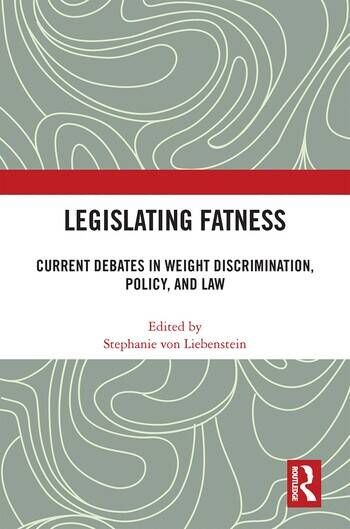 Discrimination based on body weight is an underestimated and widespread problem. There is not a single national law worldwide that prohibits weight discrimination, but quite a number of laws and policies that reinforce, or at least reflect, the existing socially ubiquitous weight stigma.

This volume focuses on where and how fatness and law intersect, discussing current anti-discrimination protections related to fatness; the ongoing debate around the introduction of new anti-discrimination categories; national and international principles that seem to argue against the introduction of legal protection of fatness; the question whether fatness should be considered a disability; and weight stigma in legal practice. Starting from a fat studies perspective, this book also considers the legal implications of anti-discrimination legislation for fatness through an intersectional lens, noting how fatness often overlaps with other marginalised identities, including race and ethnicity, gender, and socioeconomic status. This book will be of interest to both professional and lay audiences, providing an introduction into the legal aspects of weightism, as well as offering solutions for legislative practice. It will be an invaluable resource for everyone who would like to be more weight-sensitive in their legal work.


The chapters in this book were originally published as a special issue of Fat Studies: An Interdisciplinary Journal of Body Weight and Society.

Contents:
1. Fatness, disability, and anti-discrimination law: An introduction to some basic concepts
Stephanie von Liebenstein
2. Fighting for a (wide enough) seat at the table: weight stigma in law and policy
Angela Meadows, Sigrún Daníelsdóttir, Daniel Goldberg, and Marquisele Mercedes
3. The anti-stigma principle and legal protection from fattism
Iyiola Solanke
4. Failure to Launch: One-Person-One-Fare Airline Policy and the Drawbacks to the Disabled-By-Obesity Legal Argument
Jen Rinaldi, Carla Rice, and Emily Lind
5. Crossroad between the right to health and the right to be fat
Friedrich Schorb
6. Weight and the law in New Zealand
Cat Pausé and Kathryn Palmer