The Natural Moral Law: The Good After Modernity 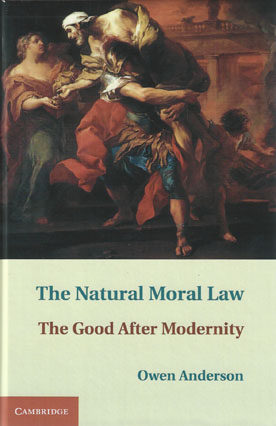 The Natural Moral Law argues that the good can be known and that therefore the moral law, which serves as a basis for human choice, can be understood.

Proceeding historically through ancient, modern and postmodern thinkers, Owen Anderson studies beliefs about the good and how it is known, and how such beliefs shape claims about the moral law.

The focal challenge is whether the skepticism of postmodern thinkers can be answered in a way that preserves knowledge claims about the good.

Considering the failures of modern thinkers to correctly articulate reason and the good and how postmodern thinkers are responding to these failures, Anderson argues that there are identifiable patterns of thinking about what is good, some of which lead to false dichotomies. The book concludes with a consideration of how a moral law might look if the good is correctly identified.

Contents:
1. The postmodern challenge: from modernity to postmodernity
2. Traditional natural law: differences in Aristotle and Aquinas
3. Patterns in historical thinking about the good
4. The challenge of modernity: religious wars and the need for universal law
5. The challenges of naturalism: legal realism or natural law
6. Objectivity without a metaphysical foundation
7. Contemporary natural law: practical rationality and legal opinions
8. Natural law as a theory with metaphysical baggage: postmodern law
9. Natural law as the moral law
10. Natural moral law in a postmodern world.