Searching for a 'Principle of Humanity' in International Humanitarian Law 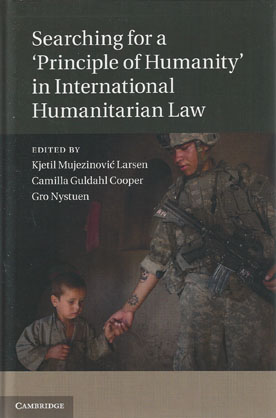 The legal norms of IHL are the product of a compromise between humanitarian considerations and the demands of military necessity.

In Searching for a 'Principle of Humanity' in International Humanitarian Law, international legal scholars consider whether humanitarian considerations have an independent legal impact on IHL beyond the formation of these norms. They ask whether a 'principle of humanity' can be said to have legal force in its own right.

Moreover, the book investigates whether regional or national differences are emerging regarding the import and emphasis placed on humanitarian considerations. For instance, do States which are not directly affected by armed conflict attach a greater weight to humanitarian considerations when interpreting and applying IHL than those States which are more directly involved in armed conflicts? Specifically, this book examines whether a particular 'Nordic perspective' can be identified, owing to those States' unique perspective on international conflicts since the Second World War.

Contents:
1. Introduction by the editors: is there a 'principle of humanity' in international humanitarian law? Kjetil Mujezinovic Larsen, Camilla G. Guldahl and Gro Nystuen
Part I. Theoretical Perspectives:
2. The main epochs of modern international humanitarian law since 1864 and their related dominant legal constructions Robert Kolb
3. The principle of proportionality Yoram Dinstein
4. The Geneva Conventions and the dichotomy between international and non-international armed conflict - curse or blessing? Cecilie Hellestveit
5. A 'principle of humanity' or a 'principle of human-rightism'? Reflections on the impact of human rights law on the conduct of hostilities Kjetil Mujezinovic Larsen
6. The principle of humanity in the development of 'special protection' for children in armed conflict: sixty years beyond the Geneva Conventions and twenty years beyond the Convention on the Rights of the Child Katarina Mansson
Part II. Nordic Experiences:
7. Military occupation of Eastern Carelia by Finland in 1941-44: was international law pushed aside? Lauri Hannikainen
8. The occupied and the occupant: the case of Norway Sigrid Redse Johansen
9. Multinational peace operations forces involved in armed conflict: who are the parties? Ola Engdahl
10. Detention in UN peace operations Peter Vedel Kessing
11. Humanity and the discourse of legality Rikke Ishoy
12. Implementation in practice: sixty years of dissemination and other implementation efforts in a Norwegian perspective Arne-Willy Dahl and Camilla G. Guldahl
13. Conclusion Kjetil Mujezinovic Larsen and Camilla G. Guldahl.