Legal Emblems and the Art of Law: Obiter Depicta and the Vision of Governance 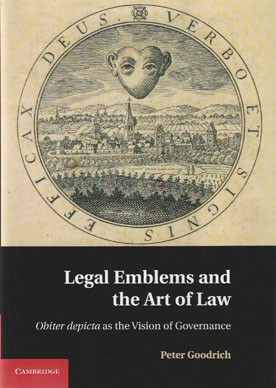 The emblem book was invented by the humanist lawyer Andrea Alciato in 1531. The preponderance of juridical and normative themes, of images of rule and infraction, of obedience and error in the emblem books is critical to their purpose and interest.

This book outlines the history of the emblem tradition as a juridical genre, along with the concept of, and training in, obiter depicta, in things seen along the way to judgment. It argues that these books depict norms and abuses in classically derived forms that become the visual standards of governance. Despite the plethora of vivid figures and virtual symbols that define and transmit law, contemporary lawyers are not trained in the critical apprehension of the visible.

This book is the first to reconstruct the history of the emblem tradition, evidencing the extent to which a gallery of images of law already exists and structuring how the public realm is displayed, made present and viewed.

Contents:
1. Introduction
2. Obiter depicta as an element of law
3. Devising law: a short history of legal emblems
4. The sovereign likes to hide: visualizing hierarchy
5. The foolosophy of justice and the enigma of law
6. The hand of the law and its amputation
7. Visibilities: persons, things, actions
8. Conclusion: virtual laws.