Brokering Europe: Euro-Lawyers and the Making of a Transnational Polity 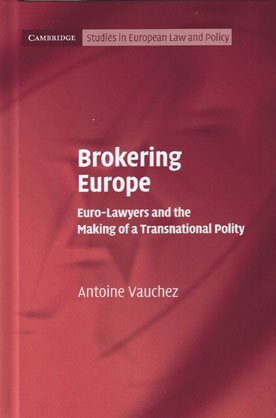 Ever since the 1960s onwards, the nature and the future of the European Union have been defined in legal terms. Yet, we are still in need of an explanation as to how this entanglement between Law and EU polity-building emerged and how it was maintained over time.

While most of the literature offers a disembodied account of European legal integration, Brokering Europe reveals the multifaceted roles Euro-lawyers have played in EU polity, notably beyond the litigation arena. In particular, the book points at select transnational groups of multipositioned legal entrepreneurs which have been in a situation to elevate the role of law in all sorts of EU venues.

In doing so, it draws from anew set of intellectual resources (field-theory) and empirical strategies only very recently mobilized for the study of the EU. Grounded on an extensive historical investigation, Brokering Europe provides a revised narrative of the 'constitutionalization of Europe'.

Contents:
Introduction
Part I. Unity through Law. Inventing Europe's 'Integration Programme':
1. Three markets, one European community. Strategies to institutionalize the Rome Treaties
2. The weak field of European law and the emerging EC polity
3. Europe at the cradle. The 'Van Gend en Loos' moment and the birth of an 'integration programme'
Part II. Jurisprudence, Code, Constitution: Europe's Building Blocks:
4. 'Jurisprudence'. Transnational esprit de corps and the maintenance of the integrationist momentum
5. 'The code'. The formation of the Acquis Communautaire and the legal objectification in Europe
6. 'Constitution'. Treaties' fragmentation and Europe's constitutional fetishism.

The Court of Justice of the European Union as an Institutional Actor: Judicial Lawmaking and its Limits (eBook)
Thomas Horsley
ISBN 9781108658324
Published July 2018
Cambridge University Press
£19.00

The Court of Justice of the European Union as an Institutional Actor: Judicial Lawmaking and its Limits
Thomas Horsley
ISBN 9781107124035
Published July 2018
Cambridge University Press
£85.00