The High Court, the Constitution and Australian Politics 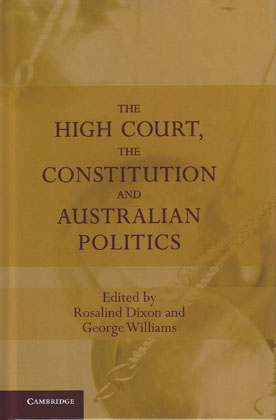 The High Court, the Constitution and Australian Politics is an in-depth exploration of the relationship between decisions of the High Court and broader political currents in Australia. It begins with an investigation of the patterns and effects of constitutional invalidation and dissent on the High Court over time, and their correlation with political trends and attitudes.

It also examines the role of constitutional amendment in expressing popular constitutional understandings in the Australian system. Subsequent chapters focus on the eras marked by the tenure of the Court's 12 Chief Justices, examining Court's decisions in the context of the prevailing political conditions and understandings of each.

Together, the chapters canvass a rich variety of accounts of the relationship between constitutional law and politics in Australia, and of how this relationship is affected by factors such as the process of appointment for High Court judges and the Court's explicit willingness to consider political and community values.