The End of the Eurocrats' Dream: Adjusting to European Diversity 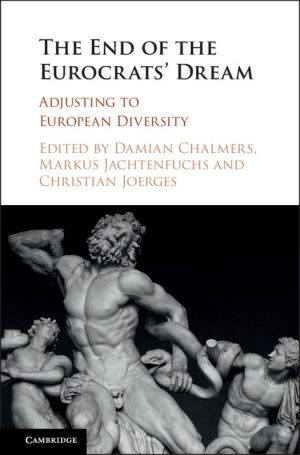 This volume argues that the crisis of the European Union is not merely a fiscal crisis but reveals and amplifies deeper flaws in the structure of the EU itself. It is a multidimensional crisis of the economic, legal and political cornerstones of European integration and marks the end of the technocratic mode of integration which has been dominant since the 1950s.

The EU has a weak political and administrative centre, relies excessively on governance by law, is challenged by increasing heterogeneity and displays increasingly interlocked levels of government. During the crisis, it has become more and more asymmetrical and has intervened massively in domestic economic and legal systems.

A team of economists, lawyers, philosophers and political scientists analyze these deeper dimensions of the European crisis from a broader theoretical perspective with a view towards contributing to a better understanding and shaping the trajectory of the EU.

Contents:
1. The retransformation of Europe D. Chalmers, M. Jachtenfuchs and C. Joerges
2. The costs of non-disintegration: the case of the European Monetary Union F. Scharpf
3. Sharing the Eurocrat's dream: a democratic approach to EMU governance in the post-crisis era K. Nicolaidis and M. Watson
4. Neumark vindicated: the three patterns of Europeanisation of national tax systems and the future of the Social and Democratic Rechtsstaat A. Menendez
5. What Europe does to citizenship C. Colliot-Thelene
6. Silencing the Eurocrats in public crisis politics P. de Wilde
7. Conflict-minimizing integration: how the EU achieves massive integration despite massive protest P. Genschel and M. Jachtenfuchs
8. An unholy trinity of EU presidents? The political accountability of post-crisis EU executive power M. Bovens and D. Curtin
9. The limits of collective action and collective leadership G. Majone
10. Europe's legitimacy problem and the courts D. Grimm
11. Crisis reconfiguration of the European constitutional state D. Chalmers
12. Integration through law and the crisis of law in Europe's emergency C. Joerges.