The Constitution of Risk 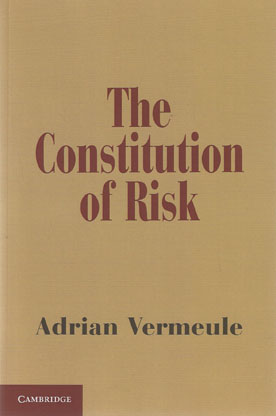 The Constitution of Risk is the first book to combine constitutional theory with the theory of risk regulation. It argues that constitutional rulemaking is best understood as a means of managing political risks.

Constitutional law structures and regulates the risks that arise in and from political life, such as an executive coup or military putsch, political abuse of ideological or ethnic minorities, or corrupt self-dealing by officials. The book claims that the best way to manage political risks is an approach it calls 'optimizing constitutionalism' - in contrast to the worst-case thinking that underpins 'precautionary constitutionalism', a mainstay of liberal constitutional theory.

Drawing on a broad range of disciplines such as decision theory, game theory, welfare economics, political science and psychology, this book advocates constitutional rulemaking undertaken in a spirit of welfare maximization, and offers a corrective to the pervasive and frequently irrational distrust of official power that is so prominent in American constitutional history and discourse.

Contents:
Part I. Theory:
1. Precautionary constitutionalism
2. Optimizing constitutionalism: the mature position
Part II. Applications:
3. Checks and balances in the extended republic: the framers' self-defeating precautions
4. The risks of impartiality: on judging in one's own cause
5. The risks of deliberation: second opinions
6. The risks of expertise: political administration and expert groupthink.