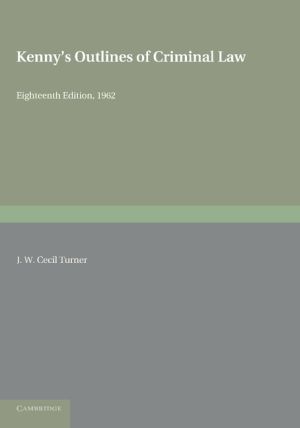 First published in 1962, as the 18th edition of a 1902 original, this book formed part of an ongoing series of elementary legal guides. There was a 19th edition in 1966, but the decision was made to reprint the 18th.

The text was not intended to be a work on criminal jurisprudence, but rather to assist students to such an understanding of the rules of criminal law as would enable them to form a clear idea of the practical task confronting the prosecution and defence in the trials of specific people.

This book will be of value to anyone with an interest in law and legal history.

Contents:
Index of cases
Index to the principal statutes
List of principal books cited
Part I. General Considerations:
1. Crime and criminal law
2. Principles of criminal liability
3. Variations in liability
4. Preliminary crimes
5. The possible parties to a crime
6. The classification of crimes
Part II. Definitions of Particular Crimes:
7. Homicide
8. Offences against the person that are not fatal
9. Bigamy
10. Criminal libel
11. Offences against property
12. Burglary and housebreaking
13. Stealing
14. Embezzlement
15. Fraudulent conversion
16. Cheats punishable at common law
17. False pretences
18. Receiving stolen property
19. Other offences involving fraud
20. Forgery
21. Offences against the state
22. Conspiracy and industrial disputes
23. Perjury and other offences against public justice
24. Offences against international law
25. Offences of vagrancy
Part III. Modes of Judicial Proof:
26. The nature of presumptions and of evidence
27. The general rules of evidence
28. Rules of evidence peculiar to criminal law
Part IV. Criminal Procedure:
29. Limitations on criminal jurisdiction
30. Criminal courts
31. Summary procedure
32. Ordinary procedure
34. Ordinary procedure
Appendix I. The meaning of 'credit'
Appendix 2. Rules as to admission of evidence which reveals to the jury facts discreditable to the person accused
Appendix 3. Forms of indictment
Index.