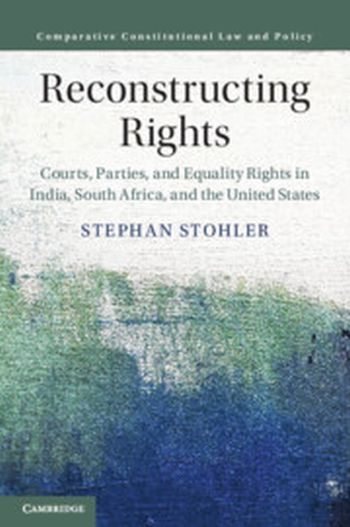 Judges often behave in surprising ways when they re-interpret laws and constitutions. Contrary to existing expectations, judges regularly abandon their own established interpretations in favor of new understandings. In Reconstructing Rights, Stephan Stohler offers a new theory of judicial behavior which demonstrates that judges do not act alone. Instead, Stohler shows that judges work in a deliberative fashion with aligned partisans in the elected branches to articulate evolving interpretations of major statutes and constitutions.

Reconstructing Rights draws on legislative debates, legal briefs, and hundreds of judicial opinions issued from high courts in India, South Africa, and the United States in the area of discrimination and affirmative action. These materials demonstrate judges' willingness to provide interpretative leadership. But they also demonstrate how judges relinquish their leadership roles when their aligned counterparts disagree. This pattern of behavior indicates that judges do not exercise exclusive authority over constitutional interpretation. Rather, that task is subject to greater democratic influence than is often acknowledged.