Emerging Powers and the World Trading System: The Past and Future of International Economic Law 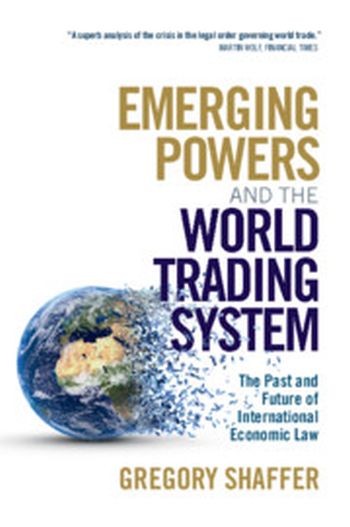 Victorious after World War II and the Cold War, the United States and its allies largely wrote the rules for international trade and investment. Yet, by 2020, it was the United States that became the great disrupter – disenchanted with the rules' constraints. Paradoxically, China, India, Brazil, and other emerging economies became stakeholders in and, at times, defenders of economic globalization and the rules regulating it. Emerging Powers and the World Trading System explains how this came to be and addresses the micropolitics of trade law – what has been developing under the surface of the business of trade through the practice of law, which has broad macro implications. This book provides a necessary complement to political and economic accounts for understanding why, at a time of hegemonic transition where economic security and geopolitics assume greater roles, the United States challenged, and emerging powers became defenders, of the legal order that the United States created.

Contents:
Part I. Legal Capacity and Transnational Legal Orders:
1. Introduction: emerging powers and the transnational legal ordering of trade
2. Building trade law capacity in emerging powers: its implications
3. The challenges of international trade law
Part II. The Cases of Brazil, India, and China:
4. Building legal capacity and adapting state institutions in Brazil with Michelle Ratton Sanchez Badin
5. India: an emerging giant's transformation and its implications with James Nedumpara and Aseema Sinha
6. How China took on the United States and Europe at the WTO with Henry Gao
7. A new Chinese economic law order? with Henry Gao
Part III. The Future of the Transnational Legal Order for Trade:
8. Why U.S. disenchantment? Managing the interface
9. Conclusion: going forward.