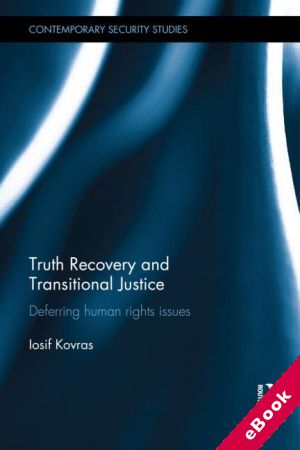 This book investigates why some societies defer the solution of transitional justice issues, such as the disappeared/missing, even after successful democratic consolidation. It also explains why the same societies finally decide to deal with these human rights issues. In short, it considers the interesting and understudied phenomenon of post-transitional justice. The prolonged silences in Spain, Cyprus and Greece contradict the experience of other countries -- such as South Africa, Bosnia, and Guatemala -- where truth recovery for disappeared/missing persons was a central element of the transition to peace and democracy. Despite democratization, the exhumation of mass graves containing the victims from the violence in Cyprus (1963-1974) and the Spanish civil war (1936-1939) was delayed until the early 2000s, when both countries suddenly decided to revisit the past. Cyprus and Spain are not alone: this is an increasing trend among countries trying to come to terms with past violence.

Interestingly, despite similar background conditions, Greece is resisting the trend, challenging both theory and regional experience. Truth Recovery and Transitional Justice considers three interrelated issues. First, what factors can explain prolonged silence on the issue of missing persons in some transitional settings? Second, which processes can address the occasional yet puzzling transformation of victims' groups from opponents of truth recovery to vocal pro-reconciliation pressure groups? Third, under which conditions is it better to tie victims' rights to an overall political settlement? The book looks at Spain and Cyprus to show how they have attempted to bring closure to deep trauma by exhuming and identifying their missing, albeit under considerably different conditions. It then probes the generalizability of the conclusions on Spain and Cyprus by looking at the Greek experience; oddly, despite similar background conditions, Greece remains resistant to post-transitional justice norms. Interestingly, each case study takes a different approach to transitional justice. This book will be of interest to students of transitional justice, human rights, peace and conflict studies and security studies in general.